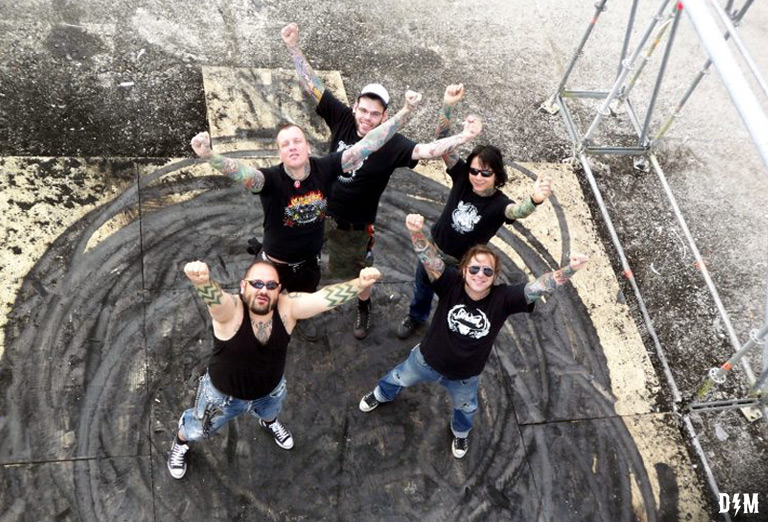 Fully tattooed rockers hailing from Germany, The V8 Wankers are nothing than pure high-speed Rock’n’Roll. Founded in 2000 in the outskirts of some dirty city they managed to conquer the world with their loud, fast and distinctive sound. They opened for bands like the Skew Siskin and Rose Tattoo and soon were on the studio to record their debut album “Blown Action Rock” released in 2002. They played the main stages of the biggest festivals in Germany along with the likes of Turbonegro and Motorhead.

Only 3 years after of being together, a second album “Automotive Rampage” is announced. European tours and over 120 shows a year filled their day by day. These fuelled up rockers are unstoppable and they managed to put 2 more albums out: “The Demon Tweak” and “Hell on Wheels” released in 2005 and 2007 respectively.

Stronger and faster than ever Germany’s Dragstrip Rock’n’Rollers summoned Dead by Mono Records with an intoxicating split with Swedish band The Carburetors. Released in 2008 the 7” EP contains 2 speedy and furious songs for each side; “We Control Rock’n’Roll” and “Rocker” for V8Wankers on the red side; and “Rock’n’Roll Forever” plus “Buckle Up” for The Carburetors on the yellow side.

Loud and fast heavy Rock action, a double bill on an impressive artwork sleeve by Baron Von Evil! It’s been a long and exciting journey for these rock and roller bastards! Keep an ear out, they might be playing nearby!