Grey-area reissue of this cult compilation, result of 6 years of traveling and record collecting in the meeting points between different music cultures; North Africa, the Bosporus and the far eastern parts of Europe. These two first two releases explores what happened when Western music styles such as modal jazz, bossa nova, fusion and funk met Arabic folk music, tone scales, instrumentation and rhythm structures in the late sixties and seventies in Turkey and Egypt. “Bosporus Bridges” is a compilation of Turkish jazz, bossa, psych, fusion and funk compiled by Lasarus and Roskow. Four hundred years ago Turkey was the centre that connected Islamic, Byzantine and Persian music and even at this time Haydn and Mozart fused Persian tone scales and colour of rhythm into their compositions. Modern Turkish music history begins in 1923, when Turkey became a republic and the leader Kemal Atatopened the doors to the western world. Musicians in Turkey first adapted the waltz, but it was the tango from Paris that spread widely and became popular throughout the country. Youth in Istanbul, Izmir and Ankara started tuning the radio to everything that was happening in London and rock arrived in the mid 50s. The first Turkish rock music came from army bands under the leadership of officers, but when The Shadows emerged on the scene, the popularity of rock exploded, since Turkish people was used to hearing instrumental music. In 1961 the magazine Ht arranged the competition Altin Mikrofon where the contestants had to arrange a traditional Turkish tune or write a Turkish song and perform it in a “western style” with electrical instruments. Altin Mikrofon is the godfather of all the Turkish rock, psych, funk, fusion and jazz that came after. Western records by Black Sabbath, Ten Years After, Beatles, The Who, Jimmy Smith and James Brown got distribution in Istanbul and Ankara and the scene exploded during the years 61-78 with names like Erkin Koray, Mogollar, Baris Manco, Siluetler Mavi Iskalar,3 Hl, Selda, Ersen and Mogollar. The blending of the electric loud, Arabic percussion, horn instruments and Arabic vocals with western jazz and funk rhythm, makes the sound of this forgotten scene unique. 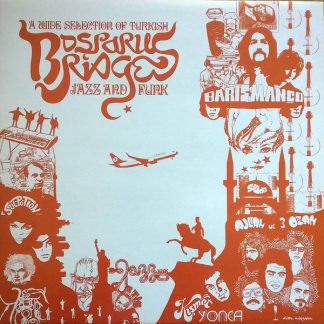