Pyromania is the third studio album by English rock band Def Leppard, released on 20 January 1983 through Vertigo Records in UK and Europe and through Mercury Records in the US. The first album to feature guitarist Phil Collen who replaced founding member Pete Willis, Pyromania was produced by Robert John “Mutt” Lange. The album was a shift away from the band’s traditional heavy metal roots toward more radio-friendly glam metal and hard rock, finding massive mainstream success. Pyromania charted at No. 2 on the Billboard 200 (kept from the top by Michael Jackson’s Thriller), No. 4 on the Canadian RPM Album chart and No. 18 on the UK Albums Chart. Selling over ten million copies in the US, it has been certified diamond by the RIAA. This iconic artwork is now available as a 500 piece jigsaw puzzle printed on high quality board.
SPECIFICATIONS:
500 pieces
Weight: 490g
Jigsaw size: 41cm x 41cm
Box size: 30.9cm x 30.9cm x 2.8cm 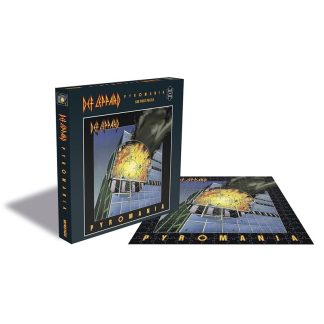