Released on 21st September 2004, “American Idiot” is the seventh studio album by the American punk rock band Green Day. A concept album dubbed a punk rock opera by the band members, “American Idiot” follows the story of Jesus of Suburbia, a lower-middle-class American adolescent anti-hero. The album has sold 16 million copies worldwide, was well received critically and won the Grammy Award for Best Rock Album in 2005. It has appeared in several lists of the best albums of the year and the decade. The album’s cover was designed by Chris Bilheimer and this iconic artwork is now available as a 500 piece jigsaw puzzle printed on high quality board.
SPECIFICATIONS:
500 pieces
Weight: 490g
Jigsaw size: 39cm x 39cm
Box size: 30.9cm x 30.9cm x 2.8cm 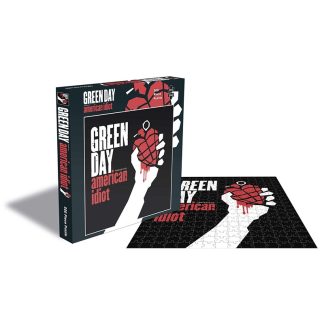