Released on 1st February 1994, “Dookie” is the third studio album by the American punk rock band Green Day. “Dookie” received critical acclaim upon its release and won the band a Grammy Award for Best Alternative Album in 1995. It was a worldwide success, reaching number two in the US and the top five in several other countries. The album is credited with bringing punk rock to mainstream popularity and propelling Green Day to worldwide fame. It has sold close to 20 million copies globally, making it one of the best-selling albums worldwide. The album cover, by fellow East Bay punk Richie Bucher, caused controversy as it depicted bombs being dropped on people and buildings. This iconic artwork is now available as a 500 piece jigsaw puzzle printed on high quality board.
SPECIFICATIONS:
500 pieces
Weight: 490g
Jigsaw size: 39cm x 39cm
Box size: 30.9cm x 30.9cm x 2.8cm 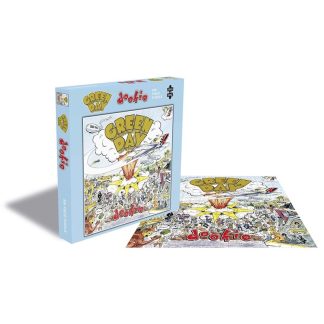