“Ride The Lightning” is Metallica’s second studio album and was released on the 27th July 1984. Although rooted in the thrash metal genre, the album showcased the band’s musical growth and lyrical sophistication. This was partly because bassist Cliff Burton introduced the basics of music theory to the rest of the band and had more input in the song writing. The artwork, based on a concept by the band, depicts an electric chair being struck by lightning flowing from the band logo. It was certified 6× platinum by the Recording Industry Association of America (RIAA) in 2012 for shipping six million copies in the United States. This iconic artwork is now available as a 500-piece jigsaw puzzle printed on high quality board. 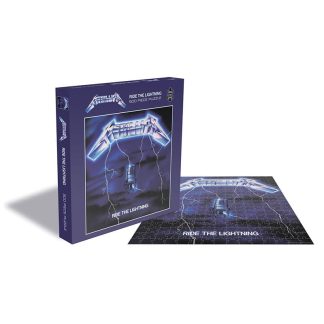