The regular edition is spray paint on genuine leather… yes, genuine dead meat… loads of different colours of leather chosen at random with each order.

Debut EP from London punk supergroup Dead Meat. This band hits that sweet spot where the tougher side of ’70s punk rock meets the roots of hardcore. The good news is that Dead Meat is back with a second EP on No Front Teeth Records — again recorded by Ben Perrier. The bad news is that this is the final release from Dead Meat. As you can imagine, band rehearsals are challenging to arrange with members living in different countries and some even residing on different continents! But given the Killed By Death vibe of Dead Meat’s recordings, it seems rather appropriate that their final output will be measured by just two EPs. Dead Meat’s second EP is very much like the first one. It includes four ripping tracks which all run well under two minutes. The tunes are raw and mean but also catchy as hell. If you like punk tunes that make you wanna bob your head even as they punch you in the mouth, this is definitely the record for you! While this will be the final release from Dead Meat, Adrian and Fisher are working on a new band in a similar vein. And Vince and Jake will continue to assault the world’s collective eardrums with the mighty Kool and the Gang Bangers and The Cavemen. Standard copies of Dead Meat II will be spray-painted on a leather sleeve by Marco NFT himself. That means that no two copies will be alike — record collectors are gonna go crazy! Supplies are limited, so get your orders in! – Faster and Louder

A1. Through The Heart
A2. Hanging On The Weekend
B1. Son Of Sam
B2. Nuffin’ New (For Trash Like You) 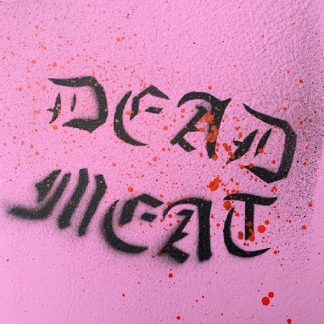