DOME LA MUERTE AND THE DIGGERS: Sorry, I’m a Digger 7″

DOME LA MUERTE AND THE DIGGERS is a superband whose leader is Dome la Muerte, founding member of the legendary band CCM (produced by Jello Biafra), guitarist of Not Moving and leader of Hush; now with the Diggers he’s not having his “return” on the scene, because he never really disappeared. He kept following his line through the years, working with several artists, writing music for theatre shows and soundtracks for movies like “Nirvana” from Gabriele Salvatores. Besides Dome, in the Diggers also play and sweat Emiliano (former drummer in Liars, the Performance and Not Right), Lady Casanova at the bass guitar (former Not Right) and Matteo “Basetta”, founder of Thunder Rod Company and, together with Emiliano, still playing with Mirteto Hillybilly Barbecue. The word “Diggers” reveals an inner meaning which must be explained, yes because the Diggers were part of a political movement which arouse at the end of the 19th century and that, in the sixties, was re-enacted through the fight to the system with goliardic methods, against bourgeoisie and the moralism of the American society in that period…
“Sorry, I’m a Digger”, featuring Rudi Protudi from the Fuzztones was taken from their debut album where each track follows the previous blending garage punk, psychedelia and rock’n roll, with aggressive chords and mild riffs, through a strong message.
TRACKLIST: 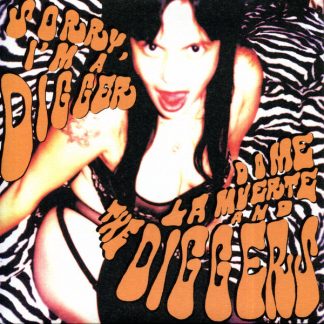