CLIQUE, THE (Featuring Alex Petty): Save Me 7″

Formed in the mid-1980s The Clique soon became the biggest and best-loved combo on the European 60’s Mod scene. Everything about the band was right – the look, the sound, the attitude and Mods around the globe hailed them as the new Mod Messiahs. The band released a couple of early singles before really bursting onto the scene with their Reggie single. This was soon followed by the Self Preservation Society album that went on to become Detours biggest ever seller – a record still held today. Unfortunately, soon after the release of the album the band fractured. Although they carried on for a couple of years with different members, the magic just wasn’t there. They split after being on the cusp of success and on the brink of signing to a large independent record company. Contains some of the earliest recordings of the band from around 1986/1987. Laying down some mighty fine pure British mod, R&B and beat. 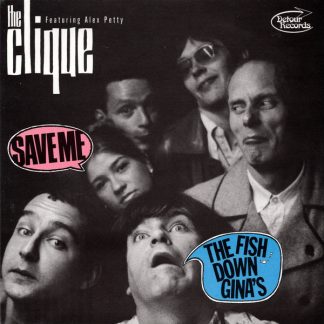