THE DUSTAPHONICS is the all-new band of Healer Selecta (aka Yvan Serrano-Fontova), the French-Hispanic London-based underground musician, DJ, producer and organiser of magnificent musical spectacles; the man about whom the press said has “re-invented swinging London”. THE DUSTAPHONICS, on this, their first single, have teamed up with legendary actress TURA SATANA (of Russ Meyer’s “Faster Pussy Cat Kill Kill” fame) who wrote the words of the song on the A-side of this record. The b-side comes courtesy of fifties rockabilly legends The Giants. THE DUSTAPHONICS offer a pure sound and a unique attitude, mixing the wild blast of the original soul and rhythm’n’blues of the 1950s and 60s, the positive energy of 50s rock’n’roll, the freshness of early-60s surf-beat, the intensity of garage-rock along with the softer vibe of jazz. And it is all done with a true authentic spirit. From a garage-rock background comes the music of Yvan, along with Bruce (from Thee Headcoats) and John (from the Wildebeests), who are joined by Aina on vocals, whose background is in hip hop and drum and bass, but who is now often compared with the great, raucous sounds of Ike & Tina Turner. The productions of Healer Selecta are officially “blessed” by the mother and the father of rock’n’roll: Bo Diddley (RIP) and Wanda Jackson. 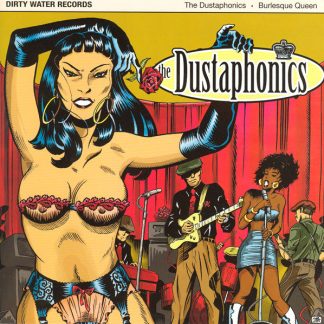 You're viewing: DUSTAPHONICS, THE: Burlesque Queen 7″ £5.00
Add to basket