MORLOCKS, THE: I Don’t Do Funerals Anymore 7″

“I Don’t Do Funerals Anymore” is a brilliant new original backed with a great cover of the Q65 classic “I got nightmares”.

THE MORLOCKS were conceived in late August 1984 when bassist Jeff Lucas, guitarist Tom Clarke and drummer Mark Mullen recruited vocalist Leighton Koizumi and guitarist Ted Friedman (both former members of Voxx recording artists The Gravedigger Five) to form a band influenced by raving ’60s punk and psychedelia. Since then they have become one of the most mysterious, respected and legendary of all American garage-punk bands.
For many years they were missing from the scene and due to an article in Spin magazine it was even thought that Leighton was dead. But their legendary frontman is still defying all the laws of God and Man and the band is back – with a new record – and with more energy, attitude and showmanship than ever.

1. I Don’t Do Funerals Anymore
2. Nightmares 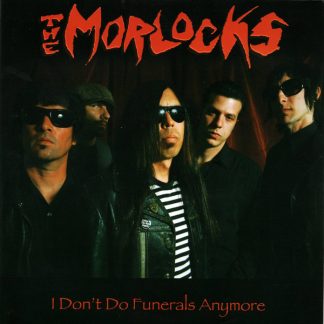