One of the most dynamic groups you could wish to see, this is surely how The Sonics would sound were they were young guys in their twenties today in the early 21st Century . . . if they were from Spain. Faster than a fast food order from a chick on roller skates, this is more a gang than a band, and are here to fuck shit up and die young! Spain’s garage rock kings make the craziest and noisiest Latino rock’n’roll music ever – a mixture of seventies punk rock and the the most fun sixties garage band sounds. Their live shows are legendary all over Europe – whether they’re new to you or are your favourite band, they are simply irresistible. The songs are fast, loud, cheap, nasty, snotty, catchy, sweaty, simple yet tight tunes that will stick to your head like superglue!
And they really know how to translate a rock’n’roll party to a recording. As one reviewer said of their last album, “One gets a straight punch of beer-soaked realism that’s the closest thing to a reproduction of a live show… the band connects with the audience by
shooting sonic adrenaline straight to the brainstem.” Like putting up a good fight or making out in the back seat of a vintage Chevy this is a band that will get your blood pumping, your heart racing, your legs jumping and leave you begging for more. 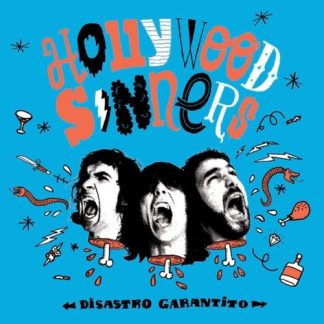