PHANTOM KEYS, THE: The Real Sounds Of… CD

Ever since we first heard of these five angry young men from Spain, we badly wanted them to be part of the ‘Screaming Apple Family’ and now we’re more than happy and honoured to present their amazing debut album ‘The Real Sounds Of’ as a big favour to all you kiddies out there, who still dig that crazy cavemen beat of the swinging sixties.
After having played countless memorable shows all across Europe with some of the best bands around, such as The SONICS, The OUTSIDERS, the LYRES and the FUZZTONES and being part of big garage-punk extravaganzas like Le Beat Bespoke and Primitive Fest, the PHANTOM KEYS are ready to present their first album. ‘The Real Sounds Of’ is a hot, smoking platter of pure sixties-punk flavoured rhythm’n’blues and proves once again impressively that the PHANTOM KEYS are one of the biggest sensations on the scene today, still being the same bunch of crazy weirdos they were in the beginning. Now comb your hair, iron your best suits and dresses, polish your boots and get ready to do the hip shake!! SCREAMING APPLE gives you The Real Sounds of THE PHANTOM KEYS!!! A raw, unadulterated teenbeat mayhem!!! 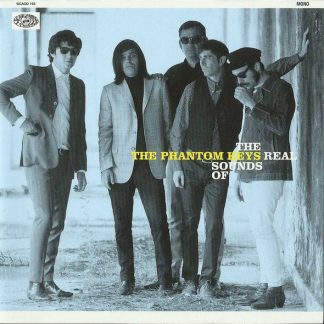