TROUBLED THREE, THE: Moving On LP

The Troubled Three are a trio from Stockholm, Sweden that has successfully entered the rockabilly scene. They do not play ordinary rockabilly tunes and perhaps that is the key to their popularity. The members all come from a background in rock music and they have played pop, punk and rock in a variety of bands. When they began to take interest in older music they didn’t listen to Elvis, but more to the roots of rock’n’roll music; rhythm & blues, jump blues, country and western swing. This forms their sound and without leaving the roots the band stands with one foot in the late 40’s and the other one in the present. TTT find their inspiration in old artists such as Big Joe Turner, Roy Montrell and the Tielman Brothers. TTT’s stage show is one of the most discussed issues. You never know who is balancing on which instrument, if drums will fly across the stage or if the members will show up in hula skirts. You can tell that TTT enjoy their time on stage.
TTT started playing together in 2009 and decided early that they wanted to get out in the world. They have done several tours in Sweden and they have also toured in Europe. During the spring of 2011, they participated in the TV program “Sweden’s got Talent” on national television in front of over one million viewers. (Sweden has about nine million residents in total.) They made it all the way to the semi-finals and did numerous festival gigs the following summer. 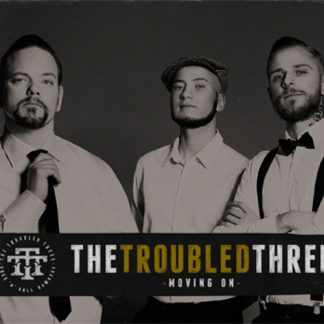 You're viewing: TROUBLED THREE, THE: Moving On LP £15.00
Add to basket