The Wildebeests are something of a garage-rock supergroup, seeing as the group consists of John Gibbs (The Kaisers, Holly Golightly Band, The Masonics), Lenny Helsing (Thanes, Green Telescope) and, last but not least, Russ Wilkins (Pop Rivets, Milkshakes and Delmonas).
These three old gits all cut their teeth playing raw beat music and generally causing a rumpus and have been doing so since before the likes of the Arctic Monkeys et al were born (which obviously means that they’re at least twice as good as any of those young whippernsappers!) and when their paths crossed they found that they had the same old cranky, rusty equipment plus some new(ish) shiny tunes that they had accumulated along the way. Finding themselves fuelled by enthusiasm, dunce caps and other ingredients – like finding out that they all shared the same attitudes and ideas when it came to “making a right old honest bloody racket” – thusly the Wildebeests did verily go forth and bang, scrape, thump and twang. Could the world be their oyster? Nope. But this doesn’t deter them from jabbing a knife in its side and trying to prise it open.
These self-styled Lairds of the Boss Racket have been polluting the world’s ears for what seems like an eternity now what with each member’s previous bands and with the sheer volume of recordings, records and gigs that they’ve seen fit to unleash upon an unsuspecting public. Dim, loud and basic is the order of the day here… But no matter how cretinous the song, great care has always been taken to capture the “performance” rather than any type of authenticity. Yes they use old equipment to record and to play but that’s not because it looks good but because it sounds good!
Gnuggets compiles, on two vinyl slabs, the complete Wildebeests 7” releases from 1994 to 2006, many of which are nearly impossible to get yer mitts on! They span from the early “Basement recordings” in the Athens of the North through the two Toe-Rag visits in the mid-’90s and back to the cottage recordings deep between the Tripe Valley and the Forest of Lard. All of the tracks chart their inability and disinterest to move forwards in musical style and panache yet the recordings display an almost mind boggling variety in both sound and choice of covers… proving very much that the Wildebeests will tackle almost anything in their own inimitable style! 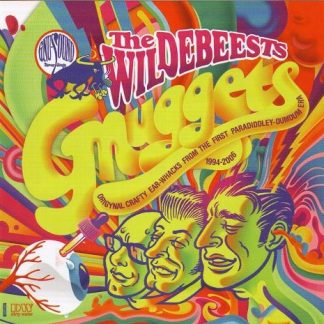 You're viewing: WILDEBEESTS, THE: Gnuggets 2xLP £20.00
Add to basket