Bored Teenagers volume 12, a highly collectable series featuring some long lost punk rock gems which have been undiscovered for over 40 years. The LP comes with an A5-size booklet.

This release kicks off with two bands from Slough, THE XTENSONS were the real deal, formed in ’77, recorded four tracks, played one chaotic gig and then disbanded. Next up is THE MYSTERY GIRLS who also feature one ex member of XTensions. The Mystery Girls had their recordings cut onto an acetate to keep. Five copies were cut and a couple of the band sent theirs away to radio stations, one of which was the late great John Peel. THE MEDIA released two rare and collectable singles back in 1979/80. ST. MATILDA’S BOYS recorded four tracks back in 1978 but sadly only this track has survived. SNYDE from Manchester were formed in 1977 and THE FAMOUS MEN were formed by Mystery Girls’ guitarist. 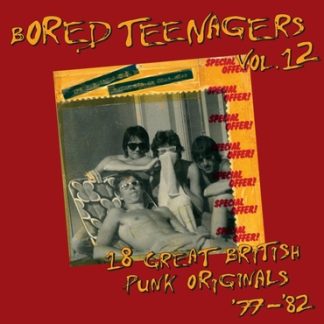