The Damned are forever in the history books as the first UK punk band to get an album out. Damned Damned Damned was a flamethrower of a record, led by the incendiary violence of “New Rose” (first UK punk single as well) and “Neat Neat Neat,” two shocking punk anthems that defined the golden era of the new wave more purely pogo-mad than anything outta The Clash or the Sex Pistols. And the mayhem never let up, with the band already breaking up and reforming (another first!) by 1979 for one of the greatest punk albums of all time, Machine Gun Etiquette (by the way, The Damned were also the first UK punk band to tour America). More punch-ups and gratuitous vandalism ensued as the band expanded its palette through the years. Popoff has wanted to write Lively Arts: The Damned Deconstructed for decades, and now that it’s finished, he’s been all over video and radio calling it his favourite and best book he’s ever done. For in it, Popoff got to analyse monastically — headphones and repeat button at the ready — every damned Damned song across all the albums and every EP and single. This herculean task represented a joy of an exercise from a penmanship point of view, but it was most satisfying in a proselytizing sense — Martin wants everybody joining him in poring over The Damned catalogue in minute detail. Let this long-suffering band of scrapping, scratching cats in a sack know how important and beloved they are before they’re all dead! 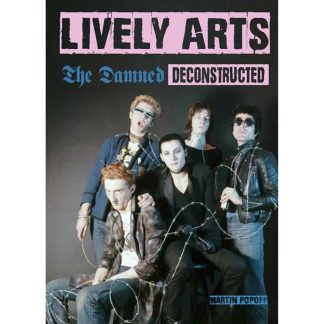