In October 2014 mainstream America – and David Letterman – was introduced to one of Japan’s most intriguing phenomenons, the virtual star known as Hatsune Miku. Making a holographic appearance as the musical guest on the Late Show with David Letterman, Miku was joined by a live band to perform the song “Sharing the World”, chosen specifically for special live performances in the US. If it all left Dave (and others) a bit confused, it’s not without reason: Miku is much more than just an animated star in the vein of Gorillaz. Rather, she’s a representation of the evolution of digital music technology, crowdsourcing, and creative collaboration.

Technically, Hatsune Miku is a program – a vocal synthesizer called a Vocaloid, developed by Japanese software company Crypton Future Media. She’s not the only one, but she is the most popular, with a rapidly growing fanbase worldwide. Anyone can buy the Vocaloid and use it to create songs; everything Miku performs live was created by members of a burgeoning global community, with over 100,000 songs featuring her voice uploaded since its launch in 2007. Miku has opened for Lady Gaga on tour and has been announced as a performer at this year’s Coachella Festival in Indio, California.

Plan 9 now present the new Hatsune Miku jigsaw puzzles. There are 3 different 500 piece jigsaw puzzles to collect, each featuring a different design from a popular artist and printed on high quality board. 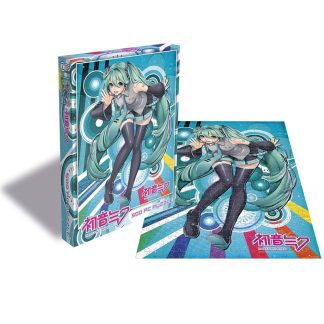