“Peace Sells… but Who’s Buying?” is the second studio album by American heavy metal band Megadeth, released on September 19, 1986. The band’s line up, at the time, featured vocalist/guitarist Dave Mustaine, bassist/vocalist David Ellefson, drummer Gar Samuelson and guitarist Chris Poland. The title track, noted for its politically conscious lyrics, was released as the album’s lead single. The album is often regarded as a thrash metal classic and as an album that gave prominence to extreme metal. It has been featured in several publications’ best album lists, including Robert Dimery’s 1001 Albums You Must Hear Before You Die and Martin Popoff’s Top 500 Heavy Metal Albums of All Time. The album’s cover art, featuring the band’s mascot Vic Rattlehead in front of a desolated United Nations Headquarters, was created by Ed Repka. Now, Rock Saws immortalises it, as a 500 piece jigsaw puzzle, printed on high quality board. 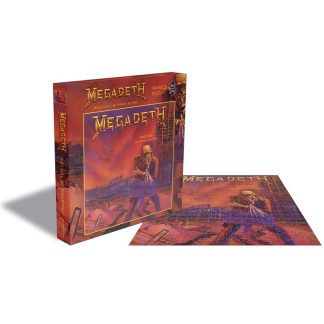