“Blackout” is the eighth studio album by German rock band Scorpions, released in 1982 on EMI Records Germany and Mercury Records. After losing his voice during the writing of the album, lead singer Klaus Meine had to undergo surgery on his vocal cords, and it was uncertain whether he would be able to record it. Demos of the material were recorded with singer Don Dokken as lead singer; however, none of those recordings are featured on the album and Dokken is only credited with and can be heard on backing vocals on the album. A self-portrait of artist Gottfried Helnwein is featured on the cover of the album. This iconic artwork is now available as a 500 piece jigsaw puzzle printed on high quality board. 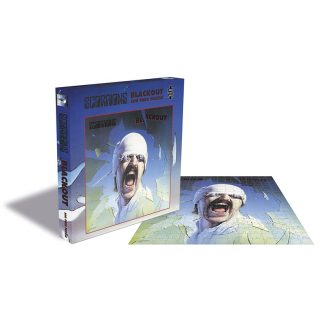