Lovedrive is the sixth studio album by German band Scorpions, released in 1979. Considered by some critics to be the pinnacle of their career, Lovedrive was a major evolution of the band’s sound, exhibiting their “classic style” that would be later developed over their next few albums. Lovedrive cemented the “Scorpions formula” of hard rock songs combined with melodic ballads. The artwork was created by Storm Thorgerson and caused some controversy in the US upon the album’s release, with later pressings of the album bearing a simple design of a blue scorpion on a black background. This iconic artwork is now available as a 500 piece jigsaw puzzle printed on high quality board. 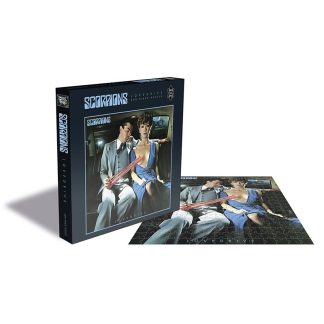