“Emotional Rescue” is the 15th British and 17th American studio album by English rock band the Rolling Stones, released on June 20, 1980.  The album was written and recorded throughout 1979 at Compass Point Studios in the Bahamas and Pathé Marconi in Paris with overdub sessions at The Hit Factory, New York.  Featuring the hit singles “She’s So Cold” and the title track, the album topped the charts in at least six countries, including the US, UK and Canada.  The album cover image was conceived by graphic designer Peter Corriston with thermographic photos taken by British-born, Paris-based artist Roy Adzak using a thermo camera, a device that measures heat emissions.  The album artwork is now available as a 500 piece jigsaw puzzle printed on high quality board. 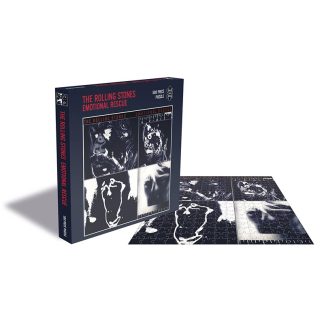