This is London’s greatest and most sensational Rhythm’n’Blues-Punk band. And this is a band that truly represents London, being a mongrel mix of Caribbean, France, Japan and Spain. With a repertoire influenced by many of the great songs of the ’50s and ’60s made to sound fresh and new to modern ears, you won’t be able to help but move your feet when the Cumberland Three are blasting out of your speakers. The King howls like Screaming Jay Hawkins with Bo Diddley chasing his coat-tail whilst Andre Williams tries to offer up some of his bacon fat, and the Trashmen do the Surfin’ Bird behind him. This is a man that never stops shakin’ and twistin’ and groovin’. The Cumberland Three (former members of punk rock bands, including The Parkinsons) rock up a storm with their own branded mix of vintage rockabilly, desperate rock’n’roll and stomping soul, with fire, energy, gusto and, above all, fun!

A. Trubble Trubble
B. Jellyfish 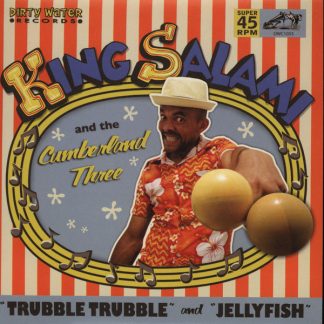