“Wish You Were Here” is the ninth studio album by the English rock band Pink Floyd, released on 12 September 1975. It was recorded over numerous sessions throughout 1975 at Abbey Road Studios in London. The album’s themes include criticism of the music business, alienation, and a tribute to founding member Syd Barrett. It has retrospectively received critical acclaim, hailed as one of the greatest albums of all time, and was cited by keyboardist Richard Wright and guitarist David Gilmour as their favourite Pink Floyd album. It reached number one in the US and UK and Harvest’s parent company, EMI, was unable to keep up with the demand. Since then, the record has sold an estimated 13 million copies.

The album was sold in one of the more elaborate packages to accompany a Pink Floyd album. Storm Thorgerson had accompanied the band on their 1974 tour and had given serious thought to the meaning of the lyrics. The album’s cover images were photographed by Aubrey “Po” Powell, Storm’s partner at the design studio Hipgnosis, and inspired by the idea that people tend to conceal their true feelings, for fear of “getting burned”, and thus two businessmen were pictured shaking hands, one man on fire. Two stuntmen were used, one dressed in a fire-retardant suit covered by a business suit. His head was protected by a hood, underneath a wig. The photograph was taken at the Warner Bros. studios in Los Angeles. The band were reportedly extremely happy with the end product, and when presented with a pre-production mockup, they accepted it with a spontaneous round of applause. 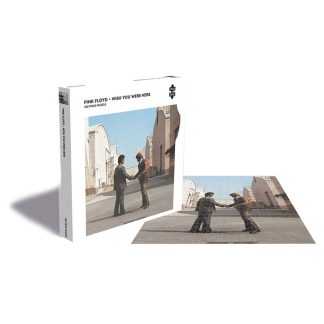