“English Civil War” is a song by English punk rock band The Clash, featured on their second album “Give ‘Em Enough Rope”, and released as a single on 23 February 1979. It reached number 25 in the UK Singles Chart and number 29 in the Irish Singles Chart. The song is derived from an American Civil War song, “When Johnny Comes Marching Home”, written by Irish-born Massachusetts Unionist Patrick Sarsfield Gilmore. It was popular among both sides of the conflict. Having learnt the song at school, Joe Strummer suggested that the band should update it. The cover of the single is a still from John Halas and Joy Batchelor’s 1954 animated adaptation of George Orwell’s dystopian novella Animal Farm and is now available as a 500 piece jigsaw from Rock Saws. 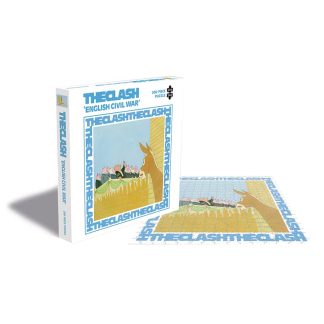