PARKINSONS, THE: Up For Sale 7″

The Parkinsons started out in Portugal in 1994 under the name of the “Tedio Boys” and released three albums under that name. They quickly earned their reputations as the nation’s Kings of Chaos, attracting notoriety for their impromptu gigs on top of buildings in their city centre. It was this word of mouth that got them an invite to play at Joey Ramone’s birthday party in New York’s Continental in 1997, an incredible honour for a little known act, and they never looked back – touring Portugal with the likes of The Fall and John Spencer in 1997/98.
They arrived in London in 2000 and have played regularly since then, under the name of “The Parkinsons” – their gigs proved to be some of the most riotous of recent times.
Their “Up For Sale” EP comprises four previously-released tracks, recorded live at their second-last ever gig at the Corn Rocket Club in Stoke Newington. 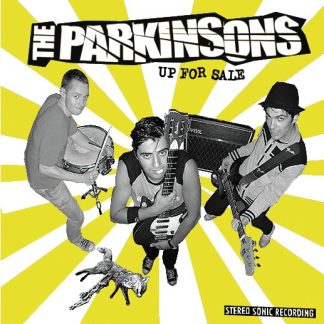