“Bridges To Babylon” is the 21st British and 23rd American studio album by English rock band the Rolling Stones, released on September 29, 1997.  The album features a wide range of genres, including the Stones-standard blues rock, sample-laden hip hop and rap.  Featuring the hit single “Anybody Seen My Baby”, the album sold well, reaching the top ten in album charts world-wide.  ‘Bridges To Babylon’ would go on to achieve platinum status in the United States and was certified Gold in the United Kingdom.  Inspired by Babylonian art exhibited at the British Museum, art director Stefan Sagmeister commissioned artist Kevin Murphy to paint the album’s cover image, featuring an Assyrian lion in an attack stance.  The album artwork is now available as a 500 piece jigsaw puzzle printed on high quality board. 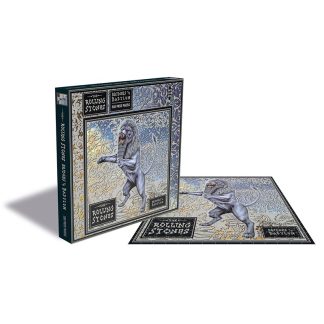