“Undercover” is the 17th British and 19th American studio album by English rock band the Rolling Stones, released on November 7, 1983.  Recording for the album began at the Pathé Marconi Studios in Paris in November 1982 and was completed in New York City the following summer.  Featuring the top-40 single “Undercover Of The Night”, the album reached number three in the UK album chart and number four on the US Billboard.  ‘Undercover’ was the fourth Rolling Stones album to have its art direction handled by graphic designer Peter Corriston, with photography and illustration by Hubert Kretzschmar.  The album’s cover image was covered with real peel-off stickers on the original vinyl edition, which when removed revealed other patterned geometric shapes.  The album artwork is now available as a 500 piece jigsaw puzzle printed on high quality board. 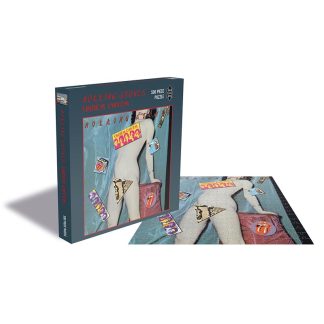