ARCHIE AND THE BUNKERS is Emmet on (drums/vocals) and Cullen (organ/vocals). Formed in Cleveland, Ohio, in 2013, the teenaged brothers began recording music in their basement, self-producing their first two EPs with a raw garage-punk sound. On stage, these home-schooled siblings attack their songs with a frenetic energy that whips the audience into a frenzy. The unique growl of sixteen-year old Cullen’s whirring, overdriven organ and the driving beat of Emmett’s four-piece drum kit leave gig-goers in shock at the sonic assault levied by a group made up of just two boys. The twelve songs on this, their debut album, were recorded at the famed Ghetto Recorders in Detroit, with near legendary producer/engineer Jim Diamond capturing that unique Archie. 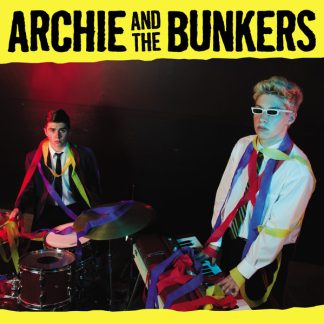 You're viewing: ARCHIE AND THE BUNKERS: Sally Lou CD £10.00
Add to basket