In God We Trust is a hardcore punk EP by the Dead Kennedys and the first of the group’s albums with drummer D.H. Peligro. The record is a screed against things ranging from organised religion and Neo-Nazis, to the pesticide Kepone and government indifference that worsened the effects of Minamata disease catastrophes. In God We Trust, Inc. is also the first Dead Kennedys album released after the presidential election of Ronald Reagan and features the band’s first references to Reagan, for which they—and hardcore punk as a genre—would become notorious.

A1. Religious Vomit
A2. Moral Majority
A3. Hyperactive Child
A4. Kepone Factory
A5. Dog Bite

B1. Nazi Punks Fuck Off
B2. We’ve Got A Bigger Problem Now
B3. Rawhide 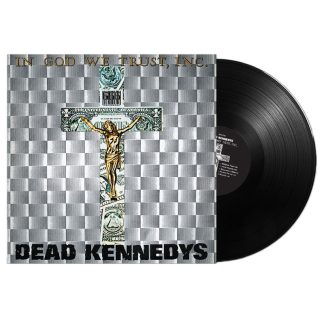 You're viewing: DEAD KENNEDYS: In God We Trust LP £28.00
Add to basket