A great punk album is one that makes you think, feel and want to mosh simultaneously. Escape From The Zoo has struck the perfect balance between all three on Countin’ Cards. It’s something that the band – the louder, faster, punk project that Days N’ Daze’s Jesse Sendejas cofounded with his wife Veronica – has always done, but never quite to this extent. Much of that is down to the circumstances that led up to the recording of these songs – most obviously a global pandemic, but his period of isolation coincided with Sendejas getting sober, so not only do the songs that make up Countin’ Cards offer up deep and poignant existential questions about life – as well as the social and political constructs that surround and consume it – but they’re also a reflection of Sendejas’ newfound clarity and the path he’s now trying to take. The result is nine songs that are earnest expressions of everyday struggle and existence. Breakneck and buoyant opener “Heads Up 7 Up” questions conforming to a life in which you’re meant to spend most of your time working. “Shit Show” – which, along with “Jars O’ Fears”, is one of two songs that Lozier mainly wrote and takes lead vocals on – wrestles with thoughts of impending mortality, “Sentient Beer” sees Sendejas question the inspiration and influence, both good and bad that drugs and booze had on him, and “Wasted Years”, as the title suggests, is a melancholy but not self-indulgent rumination on days gone by. While much of this may not sound particularly hopeful, what this record does incredibly well is offer a sense of optimistic realism – or, perhaps, realistic optimism – both on a personal level and a more universal one. 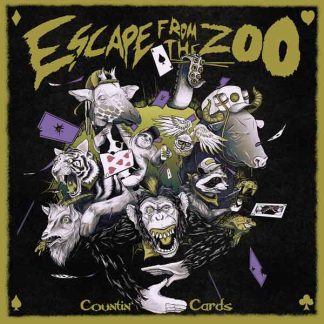 You're viewing: ESCAPE FROM THE ZOO: Countin’ Cards LP £25.00
Add to basket