The Germs are one of the most legendary and venerated of all Los Angeles hardcore punk bands. The roots of the group stemmed from the meeting of two minds at an alternative school in the late 1970s, when future vocalist Jan Paul Beahm, AKA Darby Crash, met guitarist George Ruthenberg, AKA Pat Smear, the latter a reformed Jesus freak. Spearheading the west coast hardcore scene, the band burst into public consciousness with an explosive performance at The Whisky in 1977 (introduced by future Go Go Belinda Carlisle and KROQ disc jockey Rodney Bingenheimer), with Crash (then known as Bobby Pyn) and Smear joined by bassist Lorna Doom and drummer Donna Rhia, this line-up featuring on debut single, “Forming.” Crash’s rambling, sneering and often sarcastic vocals were the perfect foil to Smear’s super fast thrash-guitar licks, and Smash was a dynamic frontman too,
despite his volatile personality. After borrowing Weirdos drummer Nicky Beat for the “Lexicon Devil” single, debut album GI, incongruously produced by Joan Jett of The Runaways, saw the introduction of Arizona-born drummer Nicky Bolles. The band’s revered status and early innovation kept them on top of the LA punk scene heap, yet Crash ended up overdosing on heroin in December 1980, his death an apparent suicide. After releasing solo
material in the late 1980s, in 1992 Smear was asked to replace John Frusciante in The Red Hot Chili Peppers but opted to join Nirvana instead, his presence there sparking the Germs revival that yielded the outtakes and live rarities set, Cats Clause, which includes rare live material from the Hong Kong Café, as well as material from Crash’s final concert at the Starwood in 1980, and more rare material, all accompanied by a lavish gatefold sleeve and a printed inner sleeve with rare photos and other memorabilia. Also included a 60x60cm poster! 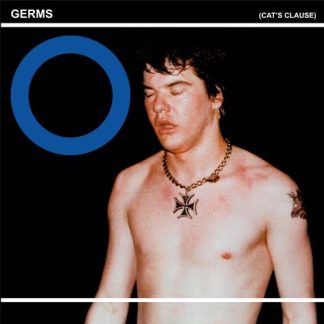