The great Peyotes 3rd album, in a beautiful gatefold sleeve designed by Rolando Bruno. Los Peyotes have totally revitalised garage-beat in South America. Taking their inspiration from their illustrious predecessors – Los Walkers, Los Shakers, Los Mockers, Los Gatos Salvajes and Los Saicos.  These five Argentine/Peruvian boys play around with the fuzz of The Litter, the darkness of The Music Machine, the psychedelic sound of summer of The Seeds and the demented tempo changes of The Count Five.
With fuzz and tremolo on the guitars, Farfisa organ, tambourines and demented screams they spit out a kind of music that is totally bonkers. The offspring of the seed of the Spanish conquistadors that brought mediaeval venereal diseases to the Americas, they are a savage sort that would have made any of the Nazi war criminals or a certain furious dictator that may have lived on their native soil raise their eyebrows in disbelief. To see them perform live you would think they were cavemen rather than 21st century gentlemen! Los Peyotes made their official debut in 2005 with “Cavernicola”, on which they recorded songs by some of the most important bands of Argentine and Uruguayan rock of the sixties.
Twelve songs were captured in this album – and all the fury, the insistent rough-hewn sound and melodies that characterises them, were shaped in this work. International recognition came quickly, with them being booked to play Uruguay, Mexico and then Spain. 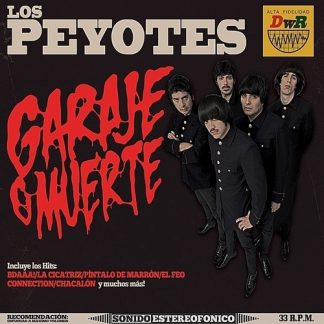