If you like a chunk of deep-fried, hip-swaying rock’n’roll with a side helping of slinky blues and sleazy r’n’b, and a dollop of scorching soul, served up in a backwoods diner by a slightly vampiric waitress, then this is for you. Steve Hooker’s music is always a treat because he refuses to keep within the arbitrary boundaries of musical genres.
The album kicks off with a swampy blues guitar instrumental which sounds like it was recorded in a wooden shack in Louisiana, and leads into “Black Train White City”, where Boz’s acoustic guitar helps to drive the song along. “Candyman” references the legend of Stagger Lee, after whom the album is named. “Devil or Angel” is downright sinister. In fact, there is a dark seam that runs through a lot of Steve Hooker’s work – because while there’s a merry jazz band piping your coffin to its grave in New Orleans, behind closed doors there’s a voodoo priestess dancing with Lucifer. “Bloodline” was inspired by the idea of Jesus’ descendents – not the crappy Da Vinci Code version, but the original writers who peered into the darker corners of Christianity and Gnosticism. “Bloodline” also features soulful backing vocals by one Bridget Metcalfe, which makes the track truly spine-tingling.
There’s a couple of well-chosen covers – “Girl That Radiates Charm” and “Red Blue Jeans & A Pony Tail”, which fellow leather-trousered Gene Vincent performed, but it’s the tracks written by Steve himself which really propel this album and make it unique. So many rockabilly acts are really cover-version bands, and Steve evades the cliche and does something original and wholly his own.
Steve Hooker has a talent for writing with his soul, rather than sitting about pondering key changes in a chin-stroking fashion. And he plays from his soul, too. With a vast back catalogue of excellent tracks, and a constant gigging schedule, Steve Hooker is a musician and performer not to be missed. 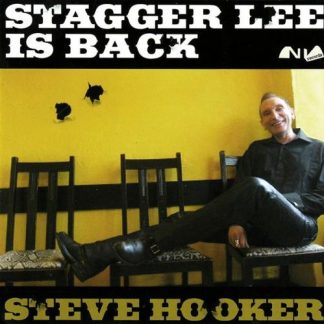 You're viewing: STEVE HOOKER: Stagger Lee Is Back CD £8.50
Add to basket