The second delivery from these Londoners. When Spencer Evoy arrived in London fresh from Canada, little did he know that his quest to reignite the spirit of the rock’n’roll sound of the American Northwest would start outside a chicken shop on the Holloway Road. Walking down that fabled stretch of tarmac, he was struck by the greasy aroma of deep fried chicken and felt his belly ache. Realising his funds had all ben spent on the plane fare, he whipped out his saxophone and proceeded to busk outside the premises in the hope of a few quid to pay for his next meal. Hearing the sweet tones of rock’n’roll drift into his bedroom in the flat above the shop, Bret Bolton called out to Spencer. Their eyes met and they instantly realised they were musical brothers in arms. Days later, they had formed a band together, naming it after the now sadly defunct and derelict chicken shop where they met: MFC Chicken.
Joined by Ravi on drums, Parsley on organ and Alberto on guitar, the poultry-loving group soon began making a name for themselves, becoming one of the hottest garage rock’n’roll acts in London, setting clubs alight with their own red hot take on “the music the Sonics were listening to”.
Having spent a good year or more honing their set and finding out which songs make the girls dance *ie. all of them!), their debut LP, “Music for Chicken”, cemented the globe-spanning gang as the finest purveyors of Pacific Northwest rhythm and blues in the land.
So do you love dancing but hate contemporary music? Are you desperate to hear garage rock’n’roll really taken back to its roots? If so, then you most definitely ready for that indescribable, unstoppable Chicken sound: “The latest and greatest item on the rock’n’roll dance menu.”
With new bassist Fernando Terror on board, MFC Chicken have continued touring the world and found time to knock out a brand new album that is EVEN better than their debut. 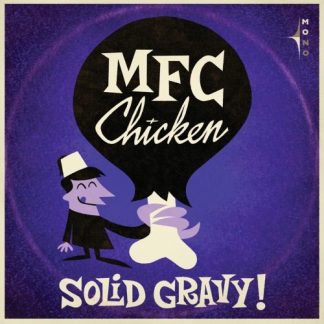