HORMONAS, THE: Why Did You Leave Me Baby? LP

Let it be known then that The Hormonas take some basic elements of what is known as garage, punk rock and psycho trash-a-billy, and mercilessly whip it up into their own sonic blastings which send them spinning into a maelstrom of tension and barely controlled menace. With hoodoo-voodoo vibes a-plenty, real cool time primitive drumming, played by Michela, and some full-on spidery / echo guitar scratchin’ n slashin’ going on, the band are to be found somewhere on the brink of Crampsian mayhem and rockin’ debauchery. Arriving on the scene in Venice, Italy in the early 2000’s, The Hormonas have taken their twisted rock’n’roll show on the road all over Italy, and over to London too, sharing bills along the way with everyone from Tav Falco’s Panther Burns, fellow Italians the Rippers, and US musician/producer Tim Kerr.

A1. Blind Boy Fantuzzi
A2. Pub Rock Is Not Dead
A3. 80’s Cemetery Town
A4. Dead Rotten Loves
B1. I Don’t Care About You
B2. Beat Pulcinella In Detroit
B3. Why Did You Leave Me Baby? 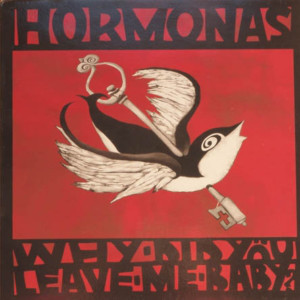