REISSUE of The Lords fifth album!

Censored by a controlling underpowered label, we have finally released the album as it was intended. Altamont was no joke, it changed the world. It changed rock’n’roll forever. We covered at least one song by every band that participated in Altamont… minus The Grateful Dead, who went home scared. Every song has a lord twist that is like a solid punch between the eyes. This was one of the hardest and funnest albums to record. It was great seeing all the past members come together for a session. Burrito Bros, Jefferson Airplane, Rolling Stones, Santana, Crosby Stills Nash and Young…how did we do it???? 6th of December, 1969 Forever changed. The 17 former Lords recorded this album in Los Angeles at the Glory Hole with Nic Jodoin. Gabe Hammond, John Tyree, Max Eisdon, Johnny DeVilla, Spencer Robinson, Wic Coleman, Dave James, Harry Drumdini, Kevin Starr, Harlen Spector, Warren Eaton, Christian Martucci, Nic Jodoin, Jake Cavaliere, Shawn Medina, Lights Out Levine, John Saletra. 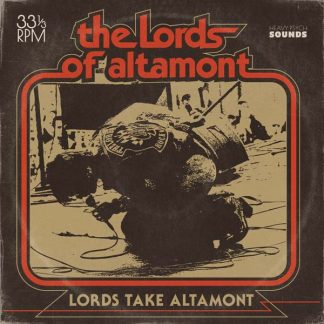 You're viewing: LORDS OF ALTAMONT, THE: Take Altamont LP (Brown) £29.50
Add to basket