Bedtime for Democracy is the fourth and final studio album by American punk rock band Dead Kennedys. Released in 1986, songs on this album cover common punk subjects often found in punk rock lyrics of the era such as conformity, Reaganomics, the U.S. military, and critique of the hardcore punk movement. The album’s title refers to the 1951 comedy film, Bedtime for Bonzo starring Ronald Reagan and also reflects the band’s weary bitterness from the trial they were undergoing at the time over the controversial art included with their previous album. By the time recording of Bedtime for Democracy had begun, the Dead Kennedys had already played what would be their last concert with Jello Biafra and announced their breakup immediately after the release of the record, whose opening track is a cover of David Alan Coe’s “Take This Job and Shove It”

B1. One-Way Ticket To Pluto
B2. Do The Slag
B3. A Commercial
B4. Gone With My Wind
B5. Anarchy For Sale
B6. Chickenshit Conformist
B7. Where Do Ya Draw The Line
B8. Potshot Heard Round The World
B9. D.M.S.O.
B10. Lie Detector 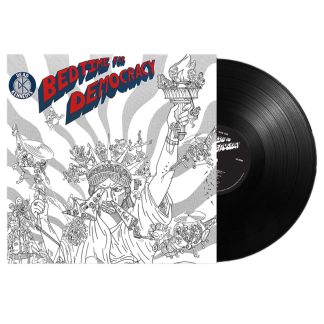