A well over due release from one of Italy’s finest Mod bands. This release gathers up everything that the band ever recorded when they were active in the 90s. They released two singles with Detour back in the 90s – Bocion Goes On EP & That’s All Right EP. Also features the bands debut release that came out on the ‘Modern Outlook’ label in 1993. On top of those tracks that appear on CD for the very first time there is a splattering of tracks that appear on different compilations from around the world and unreleased tracks! The history of this band can be traced back as far as ‘77 when all the members were in their teens and embraced the explosion of PUNK ROCK. In fact, they formed one of the earliest Punk bands – HITLERSS. With no clue of Politics, this was the most shocking name they could come up with. Then came the next instalment of their music legacy, TAMPAX were born! The sleeve to the Tampax album was so shocking it made it into the Museum of Art in their home town.
Fast forward 20 years through numerous other bands, KICKSTART were born. Their music is fast and energetic and could be compared to The Chords, The Purple Hearts, The Jam, The Circles, The Killermeters, Back To Zero… 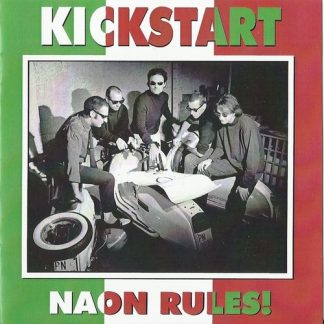