GOLDSTARS, THE: Gotta Get Out CD

The Goldstars were formed by local rock vets Skipper (organ/bass) and Goodtime (drums) moonlighting from trash rock cult heroes The New Duncan Imperials, along with bassist/vocalist Sal, formerly of raucous pop outfit The Krinkles.
After a couple of guitarist misfires, the three turned to old friend Dag Juhlin to up the wattage and loosen up the proceedings. The four mixed instantly, and over the following months the dozen songs that became Gotta Get Out took shape on the small stages of smoky Midwestern clubs.
GOTTA GET OUT is a roaring return to rock and roll basics, fuelled by greasy Motor City swagger, inebriated punk rock, nasty riffs and bar-band glory, all injected with a timeless Nuggets-style shout ability.
From the ballistic, foot-stomp of Babblin’ Brook to the short, sharp slash of Oh Yeah to the Stooges-styled rave-out of the album’s title track, Gotta Get Out is the sound of amped-up rock and roll played straight and cool, with no frills or Pro Tools tomfoolery. Ably and quickly recorded at Chicago’s legendary ACME Studios by Kris “Chainsaw” Poulin, Gotta Get Out captures the balls-out, from-the-hip rock of The Goldstars in all its urgent glory.
Just add beer. 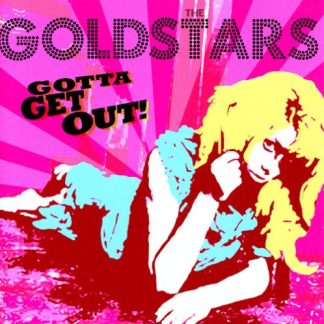